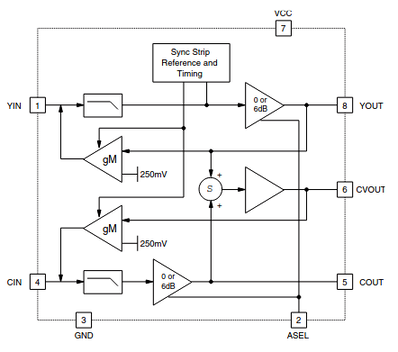 FMS6400 Block Diagram
The basis of the video driver circuit is the FMS6400 a Dual Channel Y/C Video Driver and Composite Video Summer IC chip. Basically you just feed it the proper level of the Luma 'Y' following a resistor DAC in our case, and the Chroma 'C' to get fully DC restored and filtered 75 ohm impedance video out the other end. At the same time a 3rd buffered output sums the 'Yin' and the 'Cin' to create an independent composite 75 ohm impedance video output. Since the input side of the FMS6400 is at a relatively high impedance, it eliminates the need for additional emitter follower transistor circuits and greatly simplifies the overall design of the video circuit as compared to what Atari did.

To insure that the minimum amount of noise gets introduced in this process, the FMS6400 is used in its 0 db gain mode, while the resistor DAC is composed of very low ohm values driven by a 74HCT08 Quad 'AND' Gate having much higher drive current than the CD4050 buffer chip used in the original Atari video circuit.

Although the FMS6400 is an obsolete chip, it really does such a superb job for this application that it's worth buying NOS from the likes of eBay or AliExpress. And it's readily available from those sources, being sold at a very reasonable cost of less than $1.00 each (that price includes shipping when purchased in lots of 5 pieces or more). It's commonly sold as FMS6400, FMS6400CS, FMS6400CS1 which are all essentially the same part.

NTSC Users: One Simple Modification Required on the Atari Motherboard... 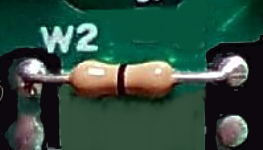 W2 Jumper
Atari for reasons I have yet to discover, decided to put a jumper from the primary crystal oscillator's output over to GTIA's PAL Color Burst Input (pin 16). On an NTSC machine this jumper is normally installed, which is bad news for the PAL detection input on the V-Gate chip. What it means is that the V-Gate chip will think it's in a PAL machine even though it's actually an NTSC. This will have the end result of causing a blue vertical stripe on the left side of the screen, and a red stripe on the right side whenever V-Gate is enabled.

The fix is easy, and amounts to either cutting one lead on the jumper or removing it all together. in either case the jumper was never required, and there will be no detrimental effect to leave it out permanently.

On all XL and XE systems it's identified as 'W2' on the motherboard's silk screen, and is either located close to the main oscillator and crystal on an XL unit, or close to the unpopulated PAL Color Burst oscillator circuit where the 74LS74 would normally be located if it were an XE PAL machine. The 74LS74 is designated as U21 on the 65XE and 130XE, or as U10 on an XEGS.

The 1200XL is the exception to this rule, and although it too has a place for a jumper (designated as 'W10' instead), it apparently was never installed in most, or maybe all of those machines. So no modification is likely to be needed. And lastly the 400/800 series didn't even have a jumper and left the NTSC GTIA pin 16 unconnected, which is what we want. 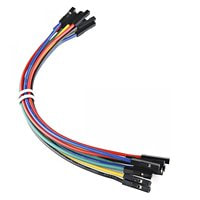 Female to Female Jumper Wires
Installation: Extremely Easy and Virtually Solder-less..
When a fully assembled board is piggybacked with the Atari's GTIA chip, the UGV instantly becomes a fully functional device with minimal external connections required other than the video outputs. Which in most cases consists of a couple of soldered points on the Atari motherboard in order to feed the stock 5-pin DIN A/V jack (reference TBA's UAV manual for locations).

And for those that wish to have an industry standard S-Video Mini-DIN connection, there's also an optional interface board available that enables a solder-less interconnection utilizing pre-made off the shelf jumper wires (check out the BOM for a source of these).