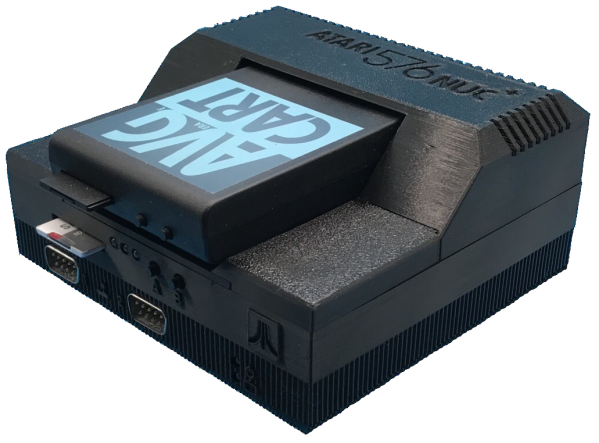 FujiNet/Cart/Case - By Mr Robot and available now from TBA - Click Image for Link
The 576NUC+ is the most compact Atari 8-bit system ever produced that is still based upon the original Atari VLSI chip set. Its primary focus was portability and to take up the minimum amount of desktop space. This meant that some things had to be sacrificed in the main board, such as inclusion of a cartridge port, although this later became available via a special FujiNet/Cart daughter board created by Steve Boswell. And unlike some of the earlier motherboard projects presented at AtariBits, this one was to be built entirely with off the shelf components, and not reliant on any 3rd party hardware (the only exception being the optional FujiNet daughter board's ESP32 module).


Shrinkage...
Because board space was at a premium, this new 576NUC+ system motherboard design needed a considerable amount of SMD to fulfill the glue logic requirements. And due to the limited space available, incorporating the color burst circuitry required for a PAL version was a no-go. However not wanting to leave out PAL users, a separate add-on GTIA piggyback board was created, better known as the PALburst board.


XEGS Origins...
Early on the decision was made to utilize an XEGS OS and the XEGS MMU/ROM configuration, which combined the OS and Basic into a single chip, while also adding a built-in game. It was found that the 32 Kbyte ROM could then be easily doubled in size with an EPROM while still retaining the same physical footprint. Thus when coupled with the integral TK-II PS/2 keyboard adapter and the now 64 Kbytes of banked ROM space (32 Kbytes x 2), the selection of two independent OS versions and 4 language/game slots was achievable through keyboard control. To complete the full memory map, 512 Kbytes of extended SRAM memory and a custom EMMU was included, offering two different banking schemes (RAMBO and CompyShop - independent Antic/CPU access).

The final additions to the design included a VGATE chip to eliminate TV over scan, and a near UAV quality custom video circuit centered around the FMS6400 video driver IC.


There be Programmable Devices in here...
There are 5 programmable devices in total that require flashing after assembling the 576NUC+ motherboard.


Two chip programmers will generally be required to complete this task: TL866II Plus and a Microchip PICkit (or JOY2PIC). All except one device, the PIC16F1847, will require flashing before insertion into the board. The PIC16F1847 chip which is the exception due to being soldered in place, requires in-circuit programming provided by an ICSP header (J7-TKPGM).


TK-II is the Brains of the 576NUC+...
The NUC specific TK-II chip in the 576NUC+ does considerably more than simply translate a PS/2 keyboard to work with Pokey. It's also acting as the main system controller, performing the power ON/OFF function, OS + Language/Game Slot selection, VGATE enable/disable, and determines what extended RAM mode is in play. All facilitated through simple keyboard shortcuts.
Cart or no Cart, and FujiNet...
With the main system board lacking facilities for a cart, and needing an easy way to load programs and games, a FujiNet daughter board was soon added to the design.  To make this a simple process, an internal SIO expansion port was incorporated that made this into a plug 'n' play affair. This gave the NUC a versatile input/output device that supported both network access via WiFi or Bluetooth, as well as having an on-board SD drive. And for those occasions where an external peripheral is still desired, there is also a Dsub-15 connection for SIO which requires an adapter (e.g., SIO2Dsub) to mate with standard peripherals. The lack of a standard SIO Jack once again came down to space limitations, and it was felt that when people became fully acquainted with FujiNet, they would no longer choose to use anything else (wishful thinking). UPDATE: for those that are looking for a cheaper option, there is now an SDrive daughter board available HERE.

Build It / Flash It / Use It
WARNING: Due to all the SMD, only people with extensive SMD assembly experience should attempt a DIY build of this project.
Keep in mind that undertaking this project is done at your own risk, and no one should be expected to bail you out if you fail.
Please don't PM, DM, Email, or Phone the creator or supplier looking for help - Instead use the public forums if you need assistance.